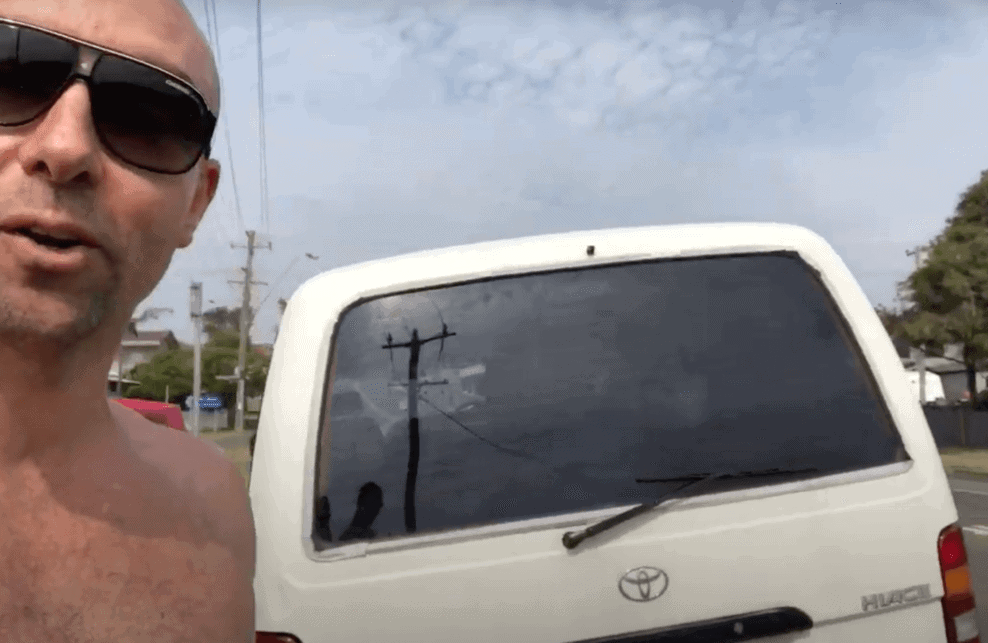 Unfortunately, many vans will rust as they age. This is especially true if you live in a coastal area because the salty air makes the problem that much more common.

The good news is that if you catch it and treat it early enough, rust doesn’t need to condemn your van or become a huge problem.

In this article I’ll answer some of the most common questions about van rust and walk you through what I did to treat the rust on my Toyota Hiace.

How much does van rust repair cost?

When I fixed the rust on my Toyota Hiace van I spent a total of $72.75 at Bunnings to buy everything that I needed.

Yep, less than $100 and I did it all myself without too much hassle.

Obviously, if you have a serious rust problem it might cost you a whole lot more than that, but this is about what you can expect to spend if you don’t have a huge amount of rust to fix and if it’s mainly just surface rust that doesn’t go too deep.

Is fixing rust on a van worth it?

Yes, it’s definitely worth fixing van rust in my opinion.

I say that for a couple of reasons. Firstly, if and when the time comes to sell your van, rust is often the first thing that prospective buyers will point out as they make their way around it and they’ll lean on any faults that they find (including rust) as a reason to offer you less than your asking price.

No visible rust just means one less objection that anyone will have with the van when they come to look at buying it.

Another important reason is because if you don’t fix small rust problems early enough they can become much bigger problems. In extreme cases where rust is left unchecked for a long time it might even be the death of your van and render it unroadworthy.

So, it’s definitely worth fixing rust as early as possible and taking steps to try to stop it from coming back again.

Will painting over rust stop it?

No, painting over rust patches doesn’t fix the problem and doesn’t stop the rust from spreading.

This isn’t a good way to deal with rust on a van and I certainly don’t suggest you do this. It’s kind of a lazy approach to fixing the problem and it’s only a bandaid solution at best.

How to fix rust on a van

To properly fix the rust on your van, first you need to remove the existing rust, then you need to apply some rust guard and after that dries you need to paint over the top of the treated area with rust-protecting paint.

It would be a good idea to regularly wash your van after the treatment (perhaps once or twice a month) and keep a close eye on the treated areas to monitor for the rust reappearing again or popping up in other places.

How to fix van rust yourself (you can DIY it!)

If I can do it, you can do it too. It’s really easy, affordable and won’t take too much time.

Here’s the step-by-step process of what I did to treat the rust on my Hiace:

Step 1: Buy the required equipment and prep for the job

I got everything I needed to treat and fix the rust from Bunnings. Here’s the list of what I bought:

Step 2: Use wet and dry paper to rub off rust from affected areas

This stuff is actually really cheap, so I recommend grabbing some exactly like the one I used (120 grit) and perhaps another sheet that’s a bit more rough just to make your life a bit easier on some of the bigger areas.

Otherwise, you’ll find it a bit more work when you work on some of the bigger areas. If all of the rust you need to treat is tiny, then the single sheet of 120 grit wet and dry paper is probably fine for the task.

Step 3: Use a paintbrush to apply a coat of rust buster and then wait for it to dry

This is pretty straightforward. Just wet the paintbrush in the rust converter and apply it to the areas that you rubbed the rust off already.

If you want to see a demo of how to do it watch the Youtube video above in this article.

Step 4: Use a paint roller to paint over the treated areas

You’ll probably need to wait a few hours, or perhaps even come back and continue working on it the following day. The important thing is to wait until the rust converter is fully dry before applying the first coat of paint.

As you may have noticed in the video (above), I didn’t even bother with a second coat of paint because by the time I was done with the first coat it looked AMAZING already.

But, if you want to make it look seriously awesome, sure, throw on a second coat if you like.

Pro tip: Use some masking tape to protect areas where you don’t want paint to get, such as rubber seals and on the edges of windows etc. This is a cheap hack that is definitely worth doing, otherwise you’ll end up with paint everywhere and it will look a bit unprofessional.

Step 5: Give the van a good wash the following day

This isn’t really part of the steps to treat or fix van rust, but it’s a nice finishing touch once the paint has dried to really spruce up your nice new van and show it off in all its glory.

It will look YEARS younger!

A final word on van rust

Van rust is important to tackle early, before it becomes a big problem.

If you’re buying a van that has some rust, you can use these tips to treat and fix the rust after you buy it, but remember to point out the rust to the seller and try to negotiate a better purchase price.

I was surprised at how cheap and easy it is to treat van rust, but after going through it, I’m convinced that anyone can do it.

I hope this article was helpful and if you have any other tips for how to treat van rust you can leave a comment on the Youtube video in this article and I’ll get back to you there.

Hi, I'm Marty Spargo and I LOVE vans. I've owned a bunch of them and I try to share what I've learned on this site so that you can take any of my ideas that you might like and improve your own vanlife experiences.

Hi, I'm Marty Spargo. I've owned vans since 2012 and spent plenty of time working on them to convert them into campers for road trips. I share all of the tips and tricks that I've learned on this site. I hope you find it helpful.

Some of the links on this site are affiliate links. I earn a small commission on qualifying purchases when you buy something on those other websites. This helps to offset some of the costs associated with running the site and lets me continue to make helpful content for current and aspiring van owners.